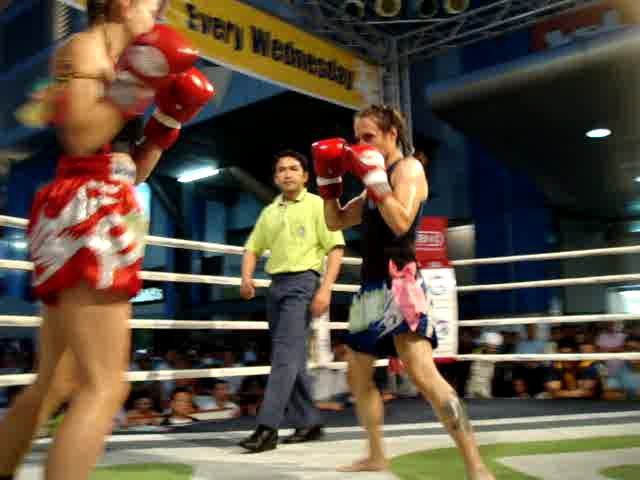 Sylvie von Duuglas-Ittuonis an amateur Muay Thai fighter with hundreds of videos on YouTube of her training and fights.  In addition to being an incredible fighter and all-around bad-ass, Sylvie is an incredible thoughtful and intelligent woman who lives for her sport.  This is the first part of our recent interview, with at least two more parts to come (because L.A. and Sylvie can apparently talk for a really long time).

Hi Sylvie!  Thank you so much for doing this interview with me!
No problem.  It sounds like a really cool project!

So, if you will, start out by telling us how you got into Muay Thai.
I had never heard of Muay Thai at all, I didn't do martial arts or any kind of competitive, well, I did soccer, but no kind of combat sports as a kid.  And when I first moved in with my husband, he is a huge kung-fu movie fan and he was having me watch an endless number of kung-fu movies.  I was kind of getting sick of them and I told him I wasn't going to watch them anymore (laughs), that I couldn't handle them anymore.  And he said, "Okay, okay, but you have to watch this one more because you have never seen anything like this."  So he puts on Ong-Bak with Tony Jaa, who is like, I don't know, the Thai Bruce Lee, and for the first twenty minutes its really not that different from most of the kung-fu movies I've been watching.  And I'm kind of getting ready to yell at my husband (laughs) and then the fight scene comes in, where Tony Jaa does this inverted knee against his attacker and my mouth just dropped open.  I was like, what just happened?!?  We had to rewind it to see what it was and I just became mesmerized at that point.  Because honestly, I had never seen anything like it.  And it struck me as being so visual and aesthetic, it was like ballet to me.  I made him watch the movie again with me (laughs) and I was like, "I have to learn this."  I really want my body to be doing these things.  So, I totally fell in love with it from that movie.

How did you find your instructor?
We live in a very weird part of New York.  We live in the Hudson Valley which is incredibly large, but we are kind of in the middle of nowhere.  You have to drive twenty minutes to get anywhere.  We were googling around trying to find out if there was Muay Thai anywhere around here and there's not.  So the closest thing we found was in New Jersey.  So I went down and was training at this gym for a little while and I was really dissatisfied with it.  I felt like the Muay Thai, or what they were calling Muay Thai, was not what I had fallen in love with.  And we had this dream, like "O wow, what if we could train with this guy Master K.  We had seen his website and it seemed like something we could not afford.  He just did one-on-one sessions.  And it turns out he was the teacher of the guy who I was currently at his gym.  So I went to see Master K a couple of times and just the instant he started showing me things, that was what I wanted to learn.  His finesse and his love of the art, it was so beautiful.  And so I kind of made the very bad decision (laughs) of telling the guy whose gym I was going to that I wanted to learn the kind of Muay Thai that his teacher had taught me and to not correct me away from it.  That I was going to split the difference and go to both of them and that didn't fly (laughs).  So ended up going only to Master K and I am really happy I started training with him in the capacity that I did.

Do you primarily do the individual training with him?  I've seen your a lot of your videos, they're incredible, by the way, really amazing.
Thank you! 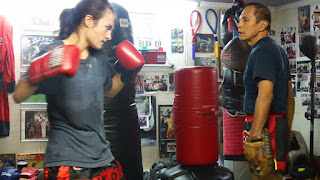 So the majority of your training is with him.  Do you ever work in a classroom situation?
I've visited gyms.  Again, my living situation is such that I can't really go to a gym on a regular basis to make it, you know, worth the membership.  So I do train with Master K one-on-one and it's been an interesting process because when you train the way I do with him, he's so detailed and he'll spend thirty-five minutes on whether or not your hip is turning in the right way.  Which when you don't have grammar yet, like it's really hard to basically learn how a comma works but you can't spell type-of-thing. So I got all the details without really having the basics and so in the process of going to Thailand and the few other trainers I've been able to see have given me more of a foundation upon which these really beautiful details that Master K teaches finally make sense.  So I feel like I've kind of had this backwards education of, like, going to college first and then going to high school (laughs).  But it's really nice, I feel like I am really understanding things every time I go to see him now.  It's like, "Oh that's what he has been talking about for three years, that's what he meant when he told me that"

In that case, are you training with him on a weekly basis?
Yeah.  Right now I am seeing him once a week.  In the past I've seen him up to three times a week.  Basically I would see him everyday if I could but it's an hour long drive, so it's two hours in the car.  You know, gas and transportation and traffic are all issues that make it difficult for me to see him more than that.  But I would live in his basement if I could (laughs).

It is such a unique situation because you only see him once or twice a week.  I imagine you have to do a lot of supplementary training on your own.
Yeah.


Do you train with a partner or do you just have a bag set-up at your house?
I have a bag set up at my house.  I have a little room that we've basically filled with the Muay Thai equipment that we've accumulated over the years.   I have a heavy bag that is on a stand that is not conducive to Muay Thai at all.  And then we have pads.  So I walk around at 102, 104 pounds and my husband is 220lbs.  So he'll strap on a belly pad and some gloves and let me wail on him.  So he's kind of my training to a large degree.  And then another of Master K's students has a gym also in New Jersey and he's invited me to come train and spar with his guys as often as I like.  Really nice.  So my sparring is a 'make-it-a-date' kind of thing.  You know finding a girl up in Kingston or going down to New Jersey or Pennsylvania, that type of thing.

Again, it is such a unique situation, especially when you're training for a fight, which is December 3rd, right?
Yeah.


So when you're in fight training, you think about sparring all the time because you really have to approach it in a different manner.  For you, what is the difference between normal maintenance training and actually gearing into your fight mode?
Hmm.  I feel that physically there is not a huge difference between the two.  There is definitely an increase in intensity leading up to a fight because you want to get your conditioning and your timing really good.  But I think that the main difference for me is a psychological training.  It actually took me a long time to realize that what you're actually training when you're getting ready for a fight is your mental game.  Like, you can get so frustrated, you've had the crappiest sparring session, just got your butt kicked by every single person and you have to train not to be defeated by that.  Train that when you get in your car you're not crying on the way home, like 'that's alright, I'm going to kick their butts next time.'  For me it's definitely that you don't realize how much you're training your emotional and mental responses when you're getting ready for a fight.

I think that is absolutely true.  You enter such a different emotional state when you're training for a fight and stressful and important.  And you're lucky because you walk very close to your fight weight, correct?
Yes

So you don't have to worry about cutting weight or gaining weight or any of those things, which is nice.  I think that's what fighters should be doing, especially women.  Have you ever had to cut weight for a fight?
Um, I say yes but whenever I tell people how much they tell me I'm a jerk and that doesn't count (laughs).  It's like two pounds, which is basically like stopping drinking water the night before.  But it's kind of a double-edged sword because the reason people drop weight is to have an advantage, so my fight weight doesn't actually exist, it's 110lbs and under.  So walking around at 102, 103, I'm really not going to get above that and my opponent may be coming down from 115lbs.  I don't think that is a huge deal.  I think that weight class and weight advantage is kind of exaggerated a lot of the time.  I think Pacquiao kind of proves that.  But it is definitely, I think especially for women the vocabulary and emotional connect with ones weight is far more difficult.  I don't think that women make a big distinction between losing weight and cutting weight.  That if you're going to cut weight, it is going to come right back, you're dehydrating your body, essentially.  Whereas women see it as 'I need to lose weight, I'm the wrong size,' which is just very emotionally packed for women, whereas guys will drop seventeen pounds for a fight and look like zombies to weight in and be like, 'I'm going to be back up twenty pounds tomorrow and it's not a big deal.'  Whereas I think a lot of women see it as kind of a diet cycle instead of a temporary advantage or something.

Absolutely wonderful interview of Sylvie. You brought a lot of important things out, and I love your easy, open interviewers voice. Really look forward to part 2.

Thanks Kevin! Sylvie was a joy to interview and, of course, it is always nice to talk to another martial arts fanatic.